skip to main | skip to sidebar

Adrian J Adams ESQ filed a lawsuit (Case #NC051275 ) against HOA Villa Riviera (a former client) in Long Beach where he once served as counsel!!!!Would your HOA now ever hire him?? It cost Villa Riviera over $55,000!!! Also, this was the same HOA where a former Board member sued him (look below). No HOA (homeowners association) should ever hire Adrian J Adams ESQ!!

UPDATE: ADAMS KESSLER WAS SUED (AGAIN!!) BY CERRITOS VILLAS HOA ON AUGUST 27, 2010!!!! ALLEGATIONS OF EMBEZZLEMENT, CONCEALMENT OF EMBEZZLEMENT, MALPRACTICE, NEGLIGENCE, AND BREACH OF FIDUCIARY DUTY ARE EVERYWHERE!!!!! PLEASE REVIEW ALL THE CASE SUMMARIES BELOW!!

PLEASE CLICK ON HERE TO ARRIVE AT THE "HOME PAGE" TO SEE ALL OUR PUBLIC COURT DOCUMENTS REGARDING ADRIAN J ADAMS OF http://www.davis-stirling.com/ !!! HIS CONDUCT IS OUTRAGEOUS!!

ADAMS KESSLER SUED FOR MALPRACTICE, NEGLIGENCE AND BREACH OF FIDUCIARY DUTY BY CERRITOS VILLAS HOA (CASE #BC444560) ON AUGUST 27, 2010


Adams Kessler owns and operates http://www.davis-stirling.com/ in which he posts an employment site for his "associates".
DON'T MAKE THE COSTLY MISTAKE OF HIRING ADRIAN J ADAMS ESQ OR ANY OF HIS ASSOCIATES. THEY WILL WORK "HAND IN HAND" TOGETHER TO DRAIN YOUR RESERVES!!! PLEASE READ BELOW HOW ADAMS KESSLER ATTEMPTED TO CONCEAL HIS "LEGAL" BILLS FROM "MALIBU BAY CLUB"!!
Posted by Adrian Adams ESQ Sucks at 8:20 AM 3 comments: 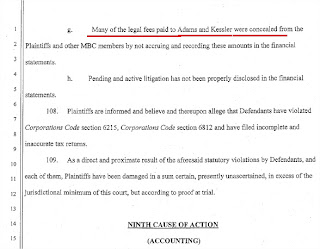 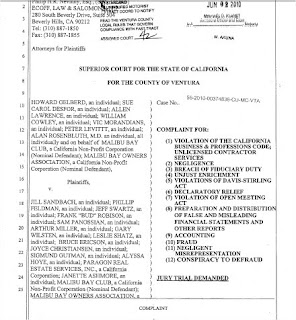 From what we know about Mr. Adams, he likes to cause conflict between the residents and Board of Directors. Why does he do this? He derives legal fees by billing the HOA thousands and thousands of dollars under the guise of “protecting” the HOA and its Board of Directors. Why would Malibu Bay Club hire Adrian J Adams ESQ when his past included suing a HOA (Villa Riviera where he once served as counsel) and getting sued by 2 different Board members that had no association with each other.
NEVER MAKE THE COSTLY MISTAKE OF HIRING ADRIAN J ADAMS ESQ OF ADAMS-KESSLER!!!

We just received this comment from a resident of "Malibu Bay Club":
"49 PAGE LAW SUIT/COMPLAINT HAS BEEN FILED IN VENTURA COUNTY SUPERIOR COURT AGAINST THE MALIBU BAY CLUB HOA AND THE MALIBU BAY OWNERS ASSOC (2 BOARDS OF DIRECTORS) AND THEIR PROPERTY MANAGER JANETTE ASHMORE, PRESIDENT OF PARAGON REAL ESTATE SERVICE OF CAMARILLO...BY A GROUP OF OVER 60 HOMEOWNERS...THE COMPLAINT INCLUDES CHARGES OF UNLICENSED CONTRACTOR SERVICES, NEGLIGENCE, BREACH OF FIDUCIARY DUTY, UNJUST ENRICHMENT, VIOLATIONS OF DAVIS STIRLING ACT, VIOLATION OF OPEN MEETING ACT, PREPARATION AND DISTRIBUTION OF FALSE AND MISLEADING FINANCIAL STATEMENTS AND REPORTS, FRAUD, NEGLIGENT MISREPRESENTATION, CONSPIRACY TO DEFRAUD...ADRIAN ADAMS HAS AND CONTINUES TO SERVE AS THE ATTORNEY FOR BOTH BOARDS AND PARAGON REAL ESTATE SERVICES...."
Posted by Adrian Adams ESQ Sucks at 8:35 AM 3 comments:

ADRIAN J ADAMS ESQ CONTINUES TO HARASS HOMEOWNERS IN ORDER TO BILL THE HOA FOR THOUSANDS AND THOUSANDS OF DOLLARS!!!

We just received a letter from an anonymous "tipster" regarding his outrageous letter to bilk the HOA of thousands and thousands of dollars. As a result, assessments are placed against the residents to replenish the depleted reserves. Please see a portion of the letter above. We have also been informed this EXACT same template letter was also sent to a resident at the Courtyards of West Hollywood in a different incident.

What attorney would ever do this other than the monstrous Adrian J Adams ESQ!!
Posted by Adrian Adams ESQ Sucks at 6:22 PM 2 comments:

The traffic for this blog continues!! Please view the counter and "live traffic feed". We have dozens of unique visitors each day.

We received this following email the other day: "We are in the process of launching a new version of http://www.evilesq.com/ which will be completed in mid-August. At that time, we will add Mr. Adams to the nominee roles of the Evil Esquire Bar Association.

" We thank you again for your support!! We are honored to be the newest addition to their site, featuring "YOURS TRULY" :)

UPDATE: ADRIAN J ADAMS, IS NOW ADDED TO THEIR WATCHLIST. READ ALL ABOUT IT HERE FOR DETAILS!!! 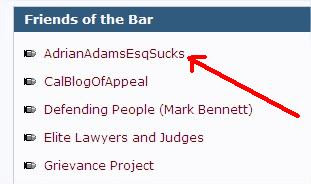 Adrian J Adams has been named as a defendant in the following cases in Los Angeles:
BC444560, BC229547, NC051275 LOOK BELOW TO SEE THE CASE SUMMARY, BC225242, NC038807, SC075791 and harassed a female resident at The Courtyards of West Hollywood (SC081143). ALL THESE CASES INVOLVED HOMEOWNERS ASSOCIATIONS!!! Please visit this website CALIFORNIA SUPERIOR COURT, CASE SUMMARY and enter the aforementioned case numbers to get all the details. 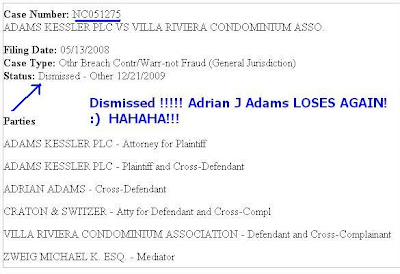 By hiring Adrian J Adams ESQ or any of his associates at Adams Kessler PLC, you are creating a imminent liability for yourself!!! Sometimes a criminal investigation is not enough to avoid any dangers!!! Please read the following article here regarding careful hiring practices.
Posted by Adrian Adams ESQ Sucks at 9:10 PM 7 comments:

ADRIAN ADAMS ESQ OF ADAMS-KESSLER PLC AND DAVIS-STIRLING.COM, HARASSES A FEMALE HOMEOWNER AND THEN LOSES!!

"The majority of the correspondence was between the CAI Association attorney Adrian Adams of Adams & AuCoin and the owner, where the Association threatened the owner with a lawsuit, restraining order, suspension of privileges, and proceeded to fine the owner $200. every day for over 6 months." Read HERE
http://www.ahrc.se/new/index.php/src/news/sub/letter/action/ShowMedia/id/2426

Update: The "victim", Ms. "S B" no longer lives at the West Hollywood Courtyard after this incident. Ms. S.B. was a well-respected, Registered Nurse (RN, now retired) and is now employed as an acupuncturist in Los Angeles where she now lives peacefully. She settled for the small amount of $75,000 (we believe she deserved more for all the abuse she sustained) as a result of the outrageous conduct of Adrian Adams ESQ.
Posted by Adrian Adams ESQ Sucks at 9:11 PM 6 comments: 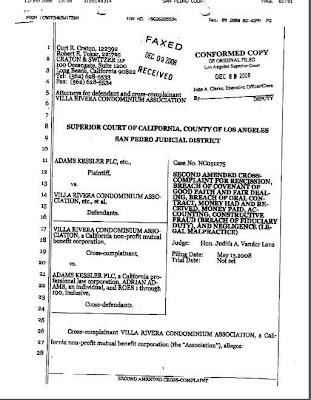 Second amended cross-complaint... the truth now begins to unravel.................. can Adrian Adams ESQ withstand the pressure?Please read a portion of the Cross Complaint. Would your HOA still hire him which cost them thousands & thousands of dollars? 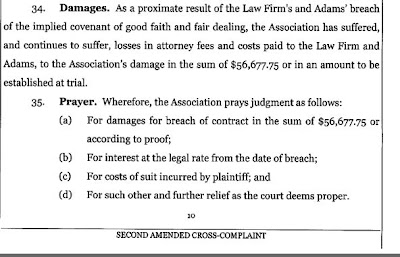 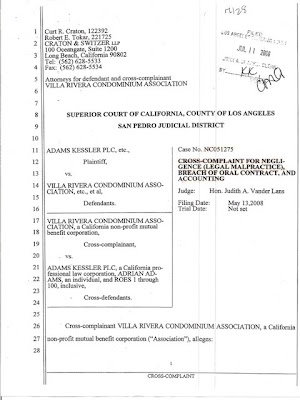 Adrian J Adams ESQ billed Villa Riviera condominium association for thousands dollars worth of bills. He claims that they did not pay him so he sued and they countersued. Their complaints:
1. Negligence
2. Legal malpractice
3. Breach of oral contract
4. Accounting
We just received an email from a former board member about this complaint. This suit is currently pending.... please review all information and reconsider before you hire him as counsel to avoid a possible (probable?), costly lawsuit with Adrian J Adams ESQ.

NOTE: Adrian J Adams advertises his website Davis-Stirling.com as the #1 resource for California's condominium and community associations, including the Davis-Stirling Act, however, it is merely a domain name and website in which he hired a web designer to build. He is not the founder of "the law".
Posted by Adrian Adams ESQ Sucks at 11:42 PM 2 comments: 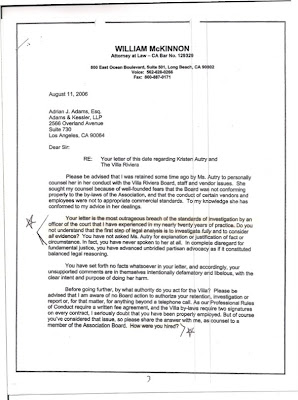 Click on the letter to enlarge and have a GREAT laugh!! Ms. Autry once served as a Board member (TREASURER) where he once served as counsel. In an unrelated incident, he is in the process of suing them (see above public court document). They fought back!!! Consider this BEFORE you decide to hire him as counsel...
Posted by Adrian Adams ESQ Sucks at 10:10 AM 1 comment: 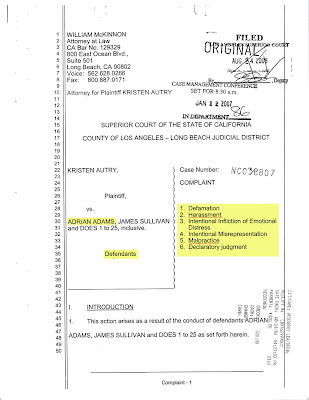 DAVIS-STIRLING.COM OWNER ADRIAN J ADAMS ESQ WAS SLAPPED WITH LAWSUIT BY A BOARD MEMBER KRISTEN AUTRY FOR DEFAMATION (AGAIN??), HARASSMENT, MALPRACTICE (AGAIN??), INTENTIONAL INFLICTION OF EMOTIONAL DISTRESS, and more.. Click on the Picture to Enlarge:

NOTE: If you have any experience or knowledge about Adams-Kessler PLC or Adrian J Adams ESQ practice click on comments link below to share with other concerned parties. Postings can be written anonymously.
Posted by Adrian Adams ESQ Sucks at 11:29 AM 4 comments:

Please review case #BC225242. Out of respect for the plaintiff's privacy, his name has been blocked. You can review the case summary at the LA Superior Court Website here. This incident is completely unrelated to the court case above in which he was once again sued for defamation.

The plaintiff here once served as a Board member and then was later harassed by Adrian J Adams ESQ. Would you still hire him?

Adrian Adams ESQ Sucks
Los Angeles, San Francisco, San Diego.., California
This website is dedicated to those who have been abused by Adrian J Adams ESQ of Adams Kessler PLC or any of his associates. This is a HOA resident and HOA Board member Free Speech based, consumer protection forum. This arena is in no way condoned by nor affiliated with Adrian J Adams ESQ, his website www.Davis-Stirling.com or www.AdamsKessler.com which are registered trademarks. This blog is used herein for non-commercial, information and fair-use identification purposes only.

This is a free speech forum. If you find information that is incorrect in any way or otherwise protected, please contact adrianadamsesqsucks at gmail dot com

This blog is posted at: